Aug 20, 2018 |
No Comments
The following is part of a series of guest posts by leaders in the field of literacy and family learning. This guest post is by Brad Meltzer, bestselling author and television host, and keynote speaker at the upcoming 2018 Families Learning Conference.

The teacher who changed my life didn’t do it by encouraging her students to stand on their desks, like John Keating in Dead Poets Society.

I was good at something. When I met Ms. Shelia Spicer, I was in the ninth grade and had just moved to Florida from Brooklyn. Most of my teachers at Highland Oaks Junior High seemed to look past me; I was one more student among hundreds. Ms. Spicer, however, took a special interest.

“You can write,” she said, explaining that she wanted to move me into the honors English class. But because of scheduling conflicts, transferring wasn’t an option. So instead, Ms. Spicer told me to ignore everything she wrote on the blackboard for the rest of the year. “Ignore the discussions. Ignore the assignments. You’re going to sit here and do the honors work.” A decade later, when my first novel was published, I went back to Ms. Spicer’s classroom and knocked on the door. “Can I help you?” she asked, trying to place me. I’d had a lot more hair the last time we saw each other. “My name is Brad Meltzer,” I said, handing her a copy of my book. “And I wrote this for you.” Ms. Spicer began to cry. She’d been considering early retirement, she said, because she felt she wasn’t having enough of an impact on her students. I didn’t know how to make Ms. Spicer understand what she’d done for me: Thanks to her, I fell in love with Shakespeare. (In fact, she once forced me to read the part of ­Romeo while a girl I had a crush on read Juliet.) I learned how to compose an essay. It was her belief in me that gave me the confidence to become a writer. I owed her. Thirteen years later, when I heard that she was ­finally ready to retire, you better believe I was at her going-away party. It felt a little like sneaking into the faculty lounge: I wanted to surprise Ms. Spicer, so I tried to blend in. But as I sipped my water and eavesdropped on school gossip, I had a troubling thought: What if Ms. Spicer wasn’t as great as I remembered? I was suddenly terrified that reality might destroy my memory of the woman who had inspired me so deeply. Over­dramatic, I know, but true. I was hiding in a corner when one of the teachers called everyone’s attention to the presentation of a parting gift—a crystal vase. All Ms. Spicer needed to do was say a few words thanking everyone for coming. Instead, she stood up and delivered a stem-winding speech that began like this: “For those of you complaining that kids have changed and that it’s harder to teach these days, you’re getting old. You’re getting lazy. These kids haven’t changed. You have! Do. Not. Give. Up. On. These. Kids!” When she finished her rallying cry, the crowd burst into applause, and I was ready to apply for a teaching certificate. That was the woman I remembered! I went up to Ms. Spicer and thanked her for changing my life all those years ago. I realized that night that I was still, and would forever be, her student. Oh, and my crush who read the part of Juliet? I married her. I owe Ms. Spicer for that, too. 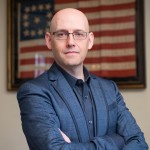 Join him at the 2018 Families Learning Conference in Ft. Lauderdale, Florida, September 24 - 26, where he will share more on this topic as a keynote speaker. He is the #1 New York Times bestselling author of The Inner Circle, The Book of Fate, and nine other bestselling thrillers including The Tenth Justice, The First Counsel, The Millionaires, and The President’s Shadow. His newest book, The Escape Artist, also debuted at #1. Follow him on Twitter, @bradmeltzer