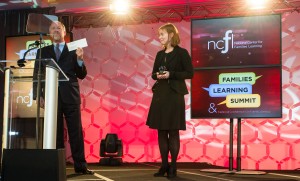 The entire Toyota Family Teacher of the Year process was a whirlwind! In January, I learned that my boss had nominated me for the award and, within a couple of weeks, I was called for a video interview. A couple of days after that, I was told I was a finalist and that I’d be going to Washington, DC. I remember having difficulty processing that I—not a classroom teacher, but an educator working in a library—could possibly be a finalist for a teaching award. Not because I don’t consider myself a teacher, but because I was so shocked that others did, too.

When the announcement was made that I had been selected as the 2014 Toyota Family Teacher of the Year, I was stunned. So stunned, in fact, that I felt a strange sense of calm as I made my way to the stage to accept the award from Michael Rouse, Toyota’s vice president of diversity, philanthropy and community affairs, during the 2014 Families Learning Summit in Washington, D.C. The lights on stage made it hard to see the people applauding, but I could hear them.

The magnitude of what had just happened started to sink in.

After the award presentation, so many people came up to me to offer their congratulations. The most touching kudos came from others who work in libraries. They were more excited than I was—and I was very, very excited! Winning the Teacher of the Year award made me feel like a rock star among librarians. You see, most librarians consider themselves educators and this award validated them as such. I was so proud to do that for them—it’s truly been the most meaningful part of the award to me. 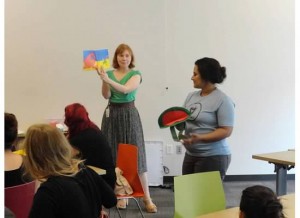 The $20,000 prize is the icing on the proverbial cake, and has really helped to open doors for Nashville Public Library. Like so many cities in the southeastern United States, Nashville has experienced a significant demographic shift over the past 20 years, with a rapidly growing foreign-born population. In fact, this year, our local paper reported that 20% of Nashville’s public school system is Latino.

Since the library is a place for everyone, we have used the prize money to engage in intentional outreach to Nashville’s non-English speaking populations, partnering with local non-profits as well as the school system. To date, we’ve had over 200 participants come to our events, which offer a taste of what the library has to offer families. We also send each child home with a book to add to their home library. None of this would have been possible without the award money. In fact, we’ve been talking with our partners about how to continue our collaborative programming.

Winning this award has been a major turning point in my career and in Nashville Public Library’s status in the community. Though the thought of handing over my crown is a bit sad, I can’t wait to see who the 2015 Teacher of the Year will be. One thing’s for sure: it will change that person's life and career in ways he or she can’t even imagine.

Help us find the 2015 Toyota Family Teacher of the Year! We want to award a $20,000 grant to an exemplary educator working with families in schools, libraries, or other community-based organizations. if you know someone who is making a difference in the lives of families, we would like to hear about him or her. Nominations are due 12/31.